Research in the School of Languages, Literatures and Cultures is interdisciplinary and vibrant.

College of Arts and Humanities, School of Languages, Literatures, and Cultures, Maryland Institute for Technology in the Humanities

Natural phenomena, including human language, are not just series of events but are organized quasi-periodically; sentences have structure, and that structure matters.

Howard Lasnik and Juan Uriagereka “were there” when generative grammar was being developed into the Minimalist Program. In this presentation of the universal aspects of human language as a cognitive phenomenon, they rationally reconstruct syntactic structure. In the process, they touch upon structure dependency and its consequences for learnability, nuanced arguments (including global ones) for structure presupposed in standard linguistic analyses, and a formalism to capture long-range correlations. For practitioners, the authors assess whether “all we need is Merge,” while for outsiders, they summarize what needs to be covered when attempting to have structure “emerge.”

Reconstructing the essential history of what is at stake when arguing for sentence scaffolding, the authors cover a range of larger issues, from the traditional computational notion of structure (the strong generative capacity of a system) and how far down into words it reaches, to whether its variants, as evident across the world's languages, can arise from non-generative systems. While their perspective stems from Noam Chomsky's work, it does so critically, separating rhetoric from results. They consider what they do to be empirical, with the formalism being only a tool to guide their research (of course, they want sharp tools that can be falsified and have predictive power). Reaching out to sceptics, they invite potential collaborations that could arise from mutual examination of one another's work, as they attempt to establish a dialogue beyond generative grammar.

The Audio-Visual Nonrelation and the Digital Break

An essay published in The Oxford Handbook of Film Theory (2022)

School of Languages, Literatures, and Cultures, Cinema and Media Studies

In the most widely accepted narratives about the recent history of cinema, the introduction of digital technology typically figures as a significant break, in which the loss of cinema’s analog photographic basis brought about a profound transformation of its nature or ontological status. This essay proposes to revisit this rather straightforward and vision-centric narrative of the digital break in order to question it from the perspective of a more rigorous understanding of cinema as an audio-visual discourse. Drawing on the work of Michel Chion and the psychoanalyst Jacques Lacan, the essay develops a concept of audio-visual discourse as something structured around a constitutive nonrelation between image and sound. Following this, the essay interrogates what consequences such a discursive and non-relational conception of audio-visual phenomena might have for our understanding of cinema’s historicity, in particular when the latter is derived from some kind of figuration of a historical break.

Read More about The Audio-Visual Nonrelation and the Digital Break

Balzac and Janin: From Complicity to Competition

This article reviews the different forms of collaboration that existed between Balzac and Janin, before and after Balzac’s identification, in a famous January 1831 article, of a “school of disenchantment”, which he associated with Janin, Nodier and Stendhal. Beyond this grouping as imagined by Balzac, the latter’s short-lived collusion with Janin reveals the paradoxical nature of the inherently competitive relationship between two young authors who are united in their clever and coordinated manipulation of the new machinery of literary publicity.

White Rabbits of Wonderland: Scenes from Translating and Teaching of Persian Theatre

''This edited volume brings together a diverse group of established and emerging practitioners in the field of Persian literary translation. Together, they examine for us not only the challenges, but also the joys experienced by those who translate premodern and modern Persian poetry and prose.'' Dominic Parviz Brookshaw, Associate Professor of Persian Literature, University of Oxford, UK

Loving the Guillotined Woman from Washington Irving to Alexandre Dumas

Alexandre Dumas' 1848 novella, La Femme au Collier de Velours belongs to a centuries-old lineage of narratives about a young man courting a mysterious woman who conceals a fatal neck wound. Over the first half of the nineteenth century, this narrative template, now featuring a guillotined woman, becomes a relatively popular device for reflecting on the events of the Terror and its lingering presence in the French and wider European cultural imaginary, even and especially for those born too late to actually witness them. In this article, I trace developments and embellishments in the guillotined woman narrative from Washington Irving's "The Adventure of the German Student" (1824) through Dumas' novella. I argue that the self conscious repetition of this narrative both amplifies and ironizes the masculine anxieties it evokes. Through constant recirculation and reanimation, the guillotined woman becomes both a figure for the uncannily restored monarchy and an allegory of degraded cultural production.

From Kitchen Arabic to Recipes for Good Taste: Nation, Empire, and Race in Egyptian Cookbooks

Winner of the Global Food History Prize for an Emerging Food Historian, this article discusses a previously understudied genre of Arabic cookbooks written by and for women during Egypt’s colonial period.

Between the 1880s and the 1950s, a new genre of cookbooks appeared in Egypt. Largely written by women, these texts addressed the housewives of Egypt’s expanding middle classes. This essay describes how the genre’s authors instructed women to nourish the nascent Egyptian nation. In prescribing specific flavors to notions of “good taste,” these cookbooks’ eclectic combinations of recipes oriented Egyptian readers towards Europe and the Arab East, rather than towards the rest of the African continent. This analysis situates these cookbooks within the overlapping spheres of Egyptian rule in Sudan, the British occupation of Egypt and Sudan, and anticolonial nationalism. It argues that studying gendered and domestic forms of labor, like cooking, can enrich our understandings of how national identity formation hinges on the construction of racial, ethnic, and class hierarchies. Cookbooks thus offer a unique perspective on the relationships between nation, empire, gender, and race.

In the book, the humorous framing of an utterance is shown to be negotiated and co-constructed dialogically and multimodally, through changes and patterns of smiling synchronicity, smiling intensity, and eye movements.

School of Languages, Literatures, and Cultures, Spanish and Portuguese 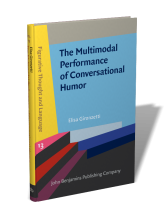 This volume is the first monograph exploring the functions of visual cues in humor, advocating for the development of a non-linguocentric theory of humor performance. It analyzes a corpus of dyadic, face-to-face interactions in Spanish and English to study the relationship between humor, smiling, and gaze, and shows how, by focusing on these elements, it is possible to shed light on the “unsaid” of conversations. In the book, the humorous framing of an utterance is shown to be negotiated and co-constructed dialogically and multimodally, through changes and patterns of smiling synchronicity, smiling intensity, and eye movements. The study also analyzes the multimodal features of failed humor and proposes a new categorization from a dialogic perspective. Because of its interdisciplinary approach, which includes facial expression analysis and eye-tracking, this book is relevant to humor researchers as well as scholars in social and behavioral sciences interested in multimodality and embodied cognition.

The Poetics of the Sufi Carnival: The Rogue Lyrics (Qalandariyyāt) as Heterotopic Countergenre(s)

New article discussing the carnivalesque poetics of the "rogue lyrics" of medieval Sufism.

The carnivalesque poetics of the “rogue lyrics” (qalandariyyāt) of medieval Sufi poetry have excited the interest of varied audiences since premodern times. This attention is not surprising: these poems' purported celebration of proscribed actions, antinomian figures, and even apostasy shocks readers and demands interpretation. Many Sufi interpreters, followed by a substantial group of contemporary scholars, have read the carnivalesque imagery of such poetry as an esoteric symbolic code that must be explicated through the Sufi hermeneutic tradition. Other scholars, largely approaching these poems from the perspective of the history of Sufism, have sought to understand this poetry’s relationship with the historical antinomian groups of the medieval Islamic world. What has been lost in these discussions, however, is an understanding of the qalandariyyāt’s poetics and its function within the larger early Persian genre system. This study focuses on elucidating the “poetics of the Sufi carnival” through an exploration of how the qalandariyyāt constructs its heterotopic poetics in its parody of ascetic-homiletic (zuhdiyyāt-mawʿiẓa) and panegyric (madḥiyyāt) poetry. The qalandariyyāt operates as a countergenre, but not in the singular. Subsumed under this broad generic umbrella are multiple subgenres—a point that also illustrates the considerable complexity and historical specificity of the early Persian genre system.

Read More about The Poetics of the Sufi Carnival: The Rogue Lyrics (Qalandariyyāt) as Heterotopic Countergenre(s)

The Qalandar King: Early Development of the Qalandariyyāt and Saljuq Conceptions of Kingship in Amir Moʿezzi’s Panegyric for Sharafshāh Jaʿfari

New article discussing the origins and cultural politics of the "rogue lyrics" of medieval Sufism.

Historical treatments of the “rogue lyrics” (qalandariyyāt) of medieval Persian poetry typically identify their origin in the Sufi poetry of Bābā Tāher, Abu Saʿid, and Sanāʾi and portray them as a poetic instantiation of the intellectual and antinomian critiques of the formalistic modes of piety practiced in the increasingly powerful institutionalized Sufi orders. However, the qalandari panegyrics of the Saljuq court poets Borhāni and Amir Moʿezzi—arguably the earliest datable examples of this poetry—analyzed in this article complicate this narrative. They utilize the heterotopic poetics of the qalandariyyāt not to subvert or critique, but rather to augment the sociopolitical authority of the ruler of Qazvin, constructing a new and distinctly Saljuq model of Islamic kingship, a Qalandar King.

Read More about The Qalandar King: Early Development of the Qalandariyyāt and Saljuq Conceptions of Kingship in Amir Moʿezzi’s Panegyric for Sharafshāh Jaʿfari