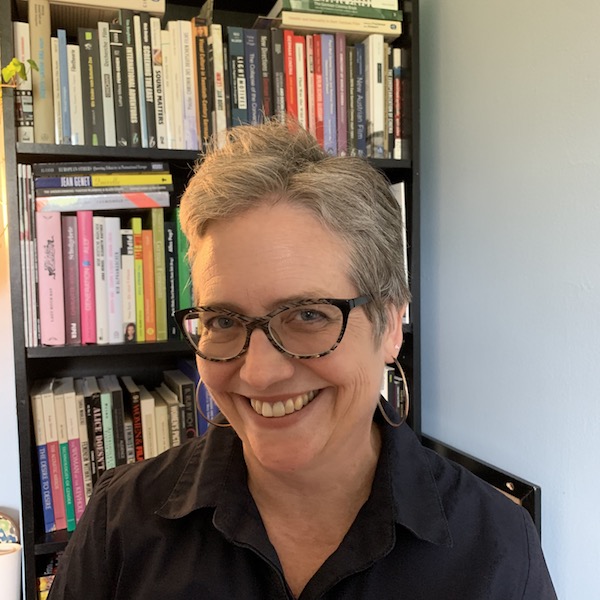 Dr. Hester Baer joined the faculty of the University of Maryland in Fall 2013. She served as the Department Head of Germanic Studies from 2015-2019. She is also a core faculty member in Cinema and Media Studies and Comparative Literature, and an affiliate faculty member in the Harriet Tubman Department of Women, Gender, and Sexuality Studies.

Professor Baer currently serves as co-editor of the German Quarterly, the flagship journal in the field. In Fall 2021, she will complete a three-year term as co-editor of the journal Feminist German Studies. Baer's research interests focus on gender and sexuality in film and media; historical and contemporary feminisms; environmental humanities; and German literature and culture in the 21st Century. Her book German Cinema in the Age of Neoliberalism was published by Amsterdam University Press in the series "Film Cultures in Transition" in March 2021. She is also the author of Dismantling the Dream Factory: Gender, German Cinema, and the Postwar Quest for a New Film Language (Berghahn Books, 2009). In Spring 2022, Baer’s new book about postwar Germany's first feminist film, Ula Stöckl's The Cat Has Nine Lives (1968) will appear in the series "German Film Classics" with Camden House.

Baer's previous publications on feminisms in the German context include "Women's Film Authorship in Neoliberal Times: Revisiting Feminism and German Cinema" (2018), a co-edited special issue of Camera Obscura; "Redoing Feminism: Digital Activism, Body Politics, and Neoliberalism" (Feminist Media Studies, 2015); and "Digital Feminisms and the Impasse: Time, Disappearance, and Delay in Neoliberalism," co-authored with Carrie Smith-Prei and Maria Stehle (Studies in 20th & 21st Century Literature, 2016). Baer has also served as the guest editor of a special issue of Studies in 20th & 21st Century Literature (2011), entitled "Contemporary Women's Writing and the Return of Feminism in Germany"; and a co-editor of German Women's Writing in the Twenty-First Century (Camden House, 2015). She is the translator and co-editor of The Blessed Abyss: Inmate #6582 in Ravensbrück Concentration Camp for Women by Nanda Herbermann (Wayne State UP, 2000), originally published in Germany in 1946.

Together with Professor Michele Mason (Japanese, UMD), Baer is the co-organizer of a collaborative research and teaching project that interrogates the concept of futurity in the context of environmental activism and artistic engagement with atomic issues from 1945 to the present. Baer and Mason are co-editors of a volume in progress, Nuclear Futures in the Post-Fukushima Age.

Professor Baer received her Ph.D. in German from Washington University in St. Louis, where she also earned a graduate certificate in Women's Studies. Her education included a fellowship from the German Academic Exchange Service (DAAD) to conduct research in Berlin and exchange years in Tübingen and Vienna. After completing her degree, she spent a year at Duke University as the Lisa Lee and Marc Ewing Postdoctoral Fellow in German Studies and Women's Studies. Before coming to Maryland, Professor Baer taught German and Women’s and Gender Studies at the University of Oklahoma, where she was named Associates Second Century Presidential Professor. Baer has served as the President of the South Central Modern Language Association and as the President of Women in German. The recipient of a Fulbright award for travel to Germany in 2004, she spent summer 2012 in Berlin on a DAAD Research Visit Grant. In 2014-15, she held the Clara and Robert Vambery Distinguished Professorship of Comparative Studies at UMD and was a fellow at the Maryland Institute for Technology in the Humanities.

At the University of Maryland, Baer teaches a wide range of courses in German language, literature, and culture, film studies, and theory. Her recent undergraduate courses include "Thinking, Feeling, and Sensing: Film Theory and the Experience of Cinema," "Feminist Film and Media Theory," "Berlin - Capital of the 20th Century," and "Nazis, Terrorists, and Spies: Coming to Terms with the Past and Present in Recent German Film." Her graduate seminars include "German Literature in the 21st Century," "Weimar Culture," and “All Power to the Imagination!: 1968 and German Culture.”

German Cinema in the Age of Neoliberalism

This books presents a new history of German film from 1980-2010, focusing on its origins in and responses to advanced capitalism.

This book presents a new history of German film from 1980-2010, a period that witnessed rapid transformations, including intensified globalization, a restructured world economy, geopolitical realignment, and technological change, all of which have affected cinema in fundamental ways. Rethinking the conventional periodization of German film history, Baer posits 1980-rather than 1989-as a crucial turning point for German cinema's embrace of a new market orientation and move away from the state-sponsored film culture that characterized both DEFA and the New German Cinema. Reading films from East, West, and post-unification Germany together, Baer argues that contemporary German cinema is characterized most strongly by its origins in and responses to advanced capitalism. Informed by a feminist approach and in dialogue with prominent theories of contemporary film, the book places a special focus on how German films make visible the neoliberal recasting of gender and national identities around the new millennium.