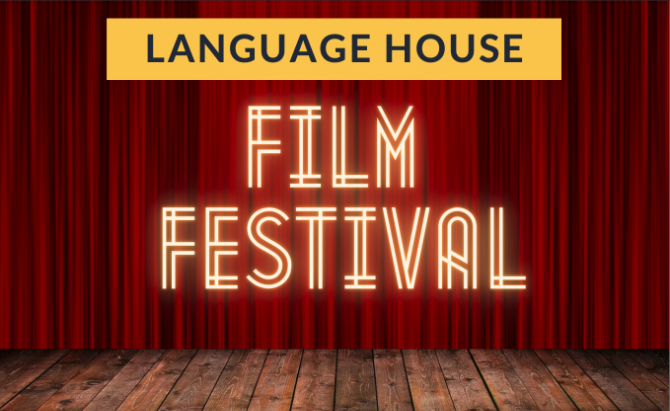 Congratulations to our clusters for their wonderful films in this year's Short Film Festival!

Congratulations to our clusters for their wonderful films in this year's Short Film Festival! Our clusters did an amazing job of tackling the theme of Immigration, looking at how immigration affects experiences, culture, language, and food. We would also like to commend our students for their hard work in putting these films together while staying safe amidst the Coronavirus pandemic. They have been very creative with this year's films!

All of the films were presented during our December 3rd Film Festival, but you can still watch them on our YouTube channel, all in one playlist.

We would also like to thank our three judges, Dr. Regina Ianozi (UG Advisor and Academic Advisor, Department of Germanic Studies), Laura McCulley (Community Director, North Hill, Department of Resident Life), and Dr. Lindsay Yotsukura (Associate Director for Academic Affairs, SLLC) who have graciously agreed to be on our judging panel, and who selected the 3 winning clusters (a grand prize and 2 runners up) of the film festival!

Our first place winner was the Chinese Cluster with their short film on food traditions. The Chinese cluster's film is a true product of our current remote environment as they made great use of virtual background and virtual reality.

Our two runners up (who tied for 2/3rd place) were the German Cluster who presented two interviews about immigration to the US and refugee movement into Germany, and the Russian Cluster that interviewed a Russian immigrant household on their thoughts about immigration and also Thanksgiving!

Our other clusters also created beautiful films this year! The Arabic cluster interviewed UMD Arabic professors on food heritage in the Middle East, while the Japanese cluster interviewed UMD Japanese professors on culture shock and their immigration experiences. The Italian cluster also interviewed people who had previously immigrated to the US and since returned to Italy. The French and Spanish clusters chose slightly different topics, and instead of interviews, both clusters filmed skits. The Spanish cluster outlined cultural differences between the United States and Latin America while the French cluster created a short guide on how to gain citizenship in France. Did you know that you could become a French Citizen after serving in the French Foreign Legion, a branch of the French Army?