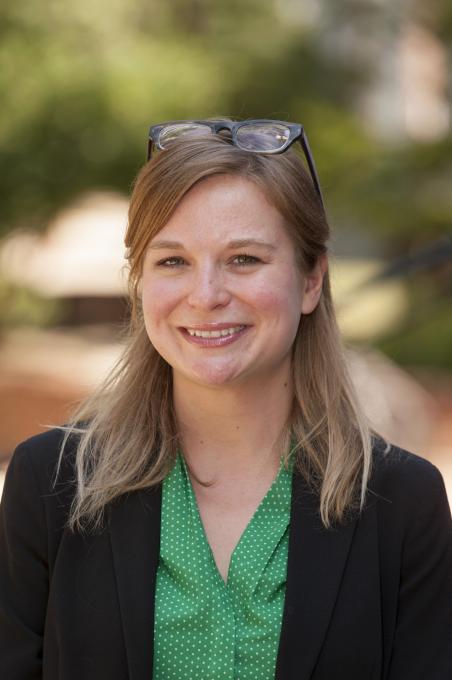 3106B Jiménez Hall
Get Directions

Originally from Montréal, Canada, Mercédès Baillargeon earned her doctorate in Romance Languages and Literatures from the University of North Carolina at Chapel Hill in 2014. Her research mainly focuses on the aesthetics, ethics and politics of 20th and 21st century first-person narrative, the intersection between public/private spaces and discourses, and the (de)construction of personal and/or collective identities. Her book, Le personnel est politique. Médias, esthétique et politique de l’autofiction chez Christine Angot, Chloé Delaume et Nelly Arcan was published by Purdue University Press in April 2019. She has also co-edited a collection of essays on third-wave feminism in Québec, Remous, ressacs et dérivations autour de la troisième vague féministe, in 2011, and has co-editied a  special issue of the journal Contemporary French Civilization on “The Transnationalism of Québec Cinema and (New) Media” with Karine Bertrand. Her current research explores the question of (post/trans) nationalism in Québec cinema of the new millennium.

Representations and Reception of French and Francophone Women Writers in the Media, (19th-21st centuries)

Featuring a keynote address by Marie-Ève Thérenty and closing dialogue with Martine Delvaux, this two-day colloquium brings together scholars from around the world to expose, discuss, and debate the issues that inform the representation and reception of French and Francophone women writers in the media, from the nineteenth century to the present day, in light of their diverse social and political realities. Insofar as it implies the analysis of strategies of visibility, and even self-promotion, the study of representations of women writers in the media extends a significant current of contemporary literary analyses – that of posture and auctorial scenography – while also including perspectives on issues of gender and identity building, understood broadly, within the study of the reception and representations of women authors.

Looking at questions of testimony, confession, trauma, sexuality, and violence in (semi-) autobiographical works, this book explores the co-construction of personal and collective identities by women writers in the age of self-disclosure and mass media.

In a time when literature is accused of being self-centered and overly narcissistic, women’s autofiction in France since the turn of the millennium has been received with controversy because it disrupts readily accepted ideas about personal and national identities, gender and race, and fiction versus autobiography. Through the study of polemical writers Christine Angot, Chloé Delaume, and Nelly Arcan, I contend that, by recounting personal stories of trauma and sexuality, and thus opposing themselves in opposition to social convention, and by refusing to dispel doubts regarding the fictional or factual nature of their texts, autofiction resists and helps redefine categories of literary genre and gender identity. This book analyzes concurrently the textual and sociopolitical implications that underlie the (de)construction of the autofictional subject, and particularly how these writers constantly redefine themselves through performance and self-fashioning made possible by media and technology. Moreover, this work raises important questions relating to the media’s complicated relationship with women writers, especially those who discuss themes of trauma, sexuality, and violence, and who also question the distinction between fact and fiction. Proposing a new understanding of autofiction as a form of littérature engagée, this work contributes to a broader understanding of the French publishing establishment and, of the literary field as a cultural institution, as well as new insight on shifting notions of identity, the Self and nationalism in today’s ever-changing and multicultural French context.

Joy, Melancholy, and The Promise of Happiness in Xavier Dolan’s Mommy (2014)

Published in the book ReFocus: The Films of Xavier Dolan, this book chapter examines the tension between joy and melancholy that traverses Dolan’s film, Mommy, through the lens of queer theory, psychoanalysis, and affect.

This film describes the complicated relationship in an improbable “family,” alternating between moments of strong connections in the midst of struggles, and moments when fits of rage, anger, and passion re-actualize a sense of loss and “never quite making it.” The chapter also discusses the idea of “normalcy,” based on Michael Warner’s work The Trouble with normal, by examining how it relates to the coming-of-age narrative, and demonstrates how failure, and ambivalence on a personal, relational level as depicted in Mommy can also translate a collective sentiment about contemporary Québec, and the world we live in. Full reference: “Joy, Melancholy, and The Promise of Happiness in Xavier Dolan’s Mommy (2014),” ReFocus: The Films of Xavier Dolan, ed. Andrée Lafontaine, Edinburgh University Press, 2019, pp. 177-190.

This article looks at the Québec New Wave as a dialogue with a new trend of global indie aesthetic that also retains some Québécois characteristics.

More specifically, this article examines the thematic and aesthetics implications of ennui in Stéphane Lafleur’s Tu Dors Nicole (2014) and Rafael Ouellet’s Gurov & Anna (2014) to better understand this new trend in the post-referendum Quebec context of the new millennium, which is simultaneously marked by weariness in the face of the question of national sovereignty, and an acceleration of cultural and economic globalization. To do so, I will first look at how ennui shapes films from the Quebec New Wave; I will then see how the films Tu Dors Nicole and Gurov & Anna both approach the question of ennui differently by questioning concepts of realism, reality, fantasy, and fiction; and finally I will explore the centrality of ennui in the Quebec New Wave in connection with the current socio-political conjuncture of Quebec. Full reference: “Cinéma indé et esthétique de l’ennui dans le renouveau du cinéma québécois,” Contemporary French Civilization, vol. 44, nos. 2-3, 2019, pp. 201-219.